BALTIMORE, Aug. 10, 2020 — Sinclair Broadcast Group, Inc. (Nasdaq: SBGI) announced that Sinclair, Sinclair’s board of directors, and its chief executive officer have agreed to settle three derivative lawsuits. The lawsuits were filed alleging breaches of fiduciary duties by the Company’s officers and directors in connection with Sinclair’s efforts to seek regulatory approval of the merger with Tribune Media Company and the Hearing Designation Order issued by the Federal Communications Commission on July 19, 2018.

On July 20, 2020, the parties to these lawsuits executed a settlement stipulation reflecting the terms of the settlement. In connection with the settlement, (a) Sinclair’s board agreed to implement a series of corporate governance measures; (b) defendants’ insurers will pay $20.5 million dollars into a settlement fund, which, after a deduction for an award of fees and expenses to plaintiffs’ counsel in an amount to be determined by the Court, will be paid to Sinclair; (c) the board will designate an aggregate amount of $5 million of the settlement fund to be used, over a period of five years, for the implementation and operation of the corporate governance measures and certain compliance programs in connection with an FCC consent decree that was previously announced on May 6, 2020; and (d) Sinclair’s Executive Chairman David D. Smith will forgo, cancel, or return a grant of SARs of 638,298 shares of Sinclair Class A common stock that was awarded to him in February 2020. The corporate governance measures include, among other actions, the establishment of a Regulatory Committee of the board (consisting of at least three directors, a majority of whom will be independent directors) to oversee responsibility for, among other matters, significant broadcast-related regulatory and compliance issues. In addition, Sinclair agreed to establish a standing Nominating and Governance Committee of the board, consisting of independent directors, and will appoint an experienced Chief Compliance Officer with enhanced responsibilities. The corporate governance measures also include the adoption of certain corporate governance guidelines and changes to Sinclair’s Code of Business Conduct and Ethics policy and to the Company’s policies concerning related-party transactions. These measures are described in further detail in Exhibit A to the settlement stipulation. In exchange, and subject to final court approval, the lawsuits will be dismissed and defendants will be released of any claims relating to the Tribune merger or the HDO. Defendants have not admitted any liability or wrongdoing in connection with the Settlement and have entered into the Settlement to avoid the costs, risks, distraction, and uncertainties of continued litigation.

On August 6, 2020, the U.S. District Court for the District of Maryland entered an order preliminarily approving the Settlement as fair, reasonable and adequate, and providing for the attached notice to shareholders of the Settlement. The Court will consider whether to enter an order providing final approval to the settlement at a hearing currently scheduled for October 27, 2020. Sinclair respectfully refers you to full copies of the attached (a) Notice of Pendency of Derivative Action, Proposed Settlement of Derivative Action, Settlement Hearing, and Right to Appear; (b) District Court’s August 6, 2020 Order Preliminarily Approving the Settlement and Providing for Notice; (c) Settlement Stipulation; and (d) proposed Final Order and Judgment, which the parties will ask the court to enter following the final settlement hearing. These documents include, among other things, the complete terms of the settlement, the Court’s process for reviewing the settlement, and shareholders’ rights with respect to the settlement. These documents are attached to this press release (please click on links below) and are available on Sinclair’s website.

Sinclair is a diversified media company and leading provider of local sports and news. The Company owns and/or operates 23 regional sports network brands; owns, operates and/or provides services to 191 television stations in 89 markets; is a leading local news provider in the country; owns multiple national networks; and has TV stations affiliated with all the major broadcast networks. Sinclair’s content is delivered via multiple platforms, including over-the-air, multi-channel video program distributors, and digital platforms. The Company regularly uses its website as a key source of Company information which can be accessed at www.sbgi.net. 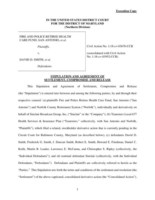 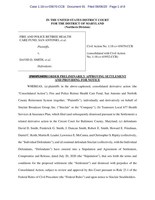 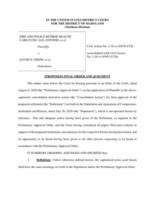